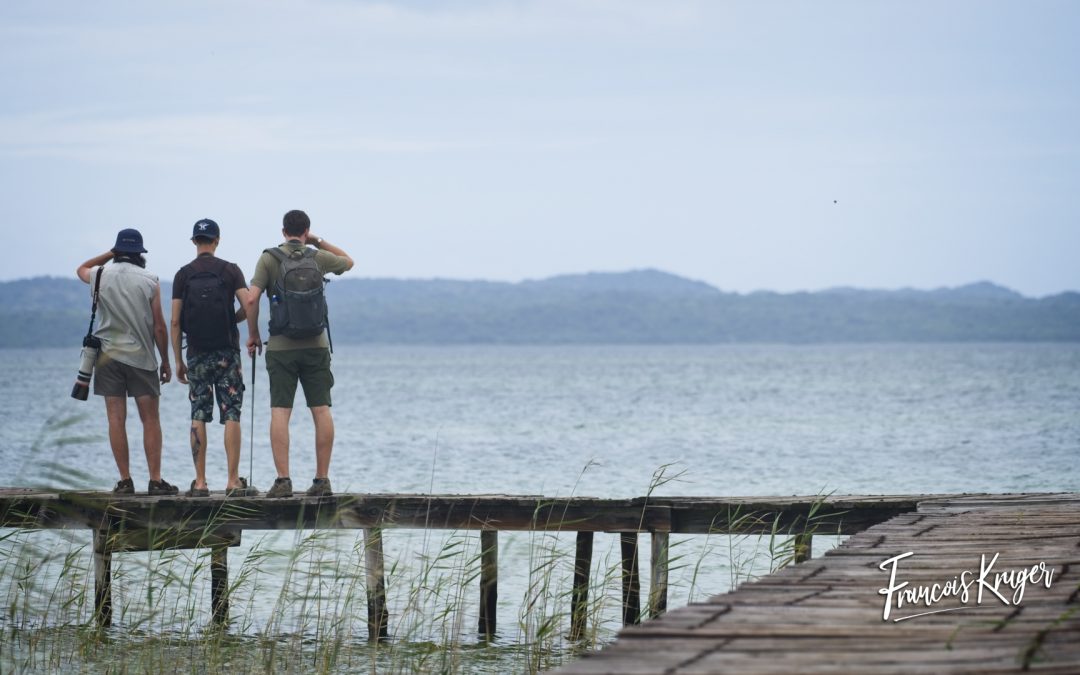 Okay maybe I have to include the three young men that joined me are crazy! But not that kind of crazy, another kind…

This was Christopher’s weekend away before the ball and chain… yes and still not that kind of crazy! 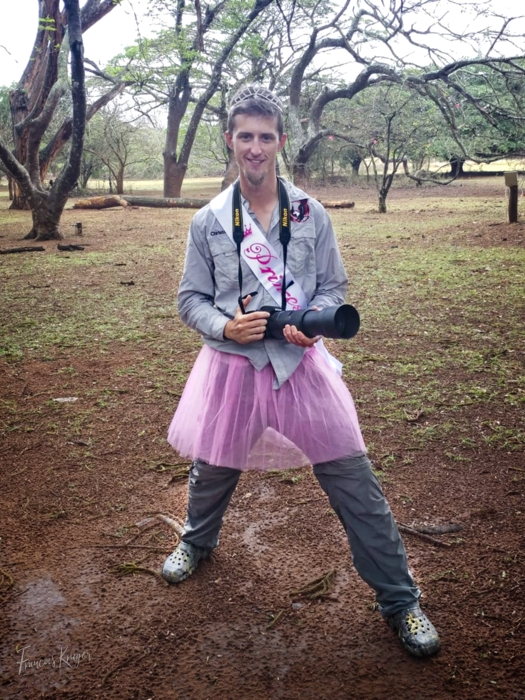 Christopher in his birding setup

Christopher has emigrated to the country of the long white cloud but came back to get married because all the family lives here. His craziness started off with fishing long ago, I think he is only one of a few people in Southern Africa who has caught basically every fish there is to catch in our waters and documented it.

Having achieved this feat he set his sights on scorpions and snakes next, so now you are getting more in tune with the kind of craziness I’m talking about. Luckily for me he started to take an interest in birds too. Through these new challenges he met and introduced me to Joubert, ‘Captain no fear’, and ‘Jo’ Buggs, one of the top young birders in the country. 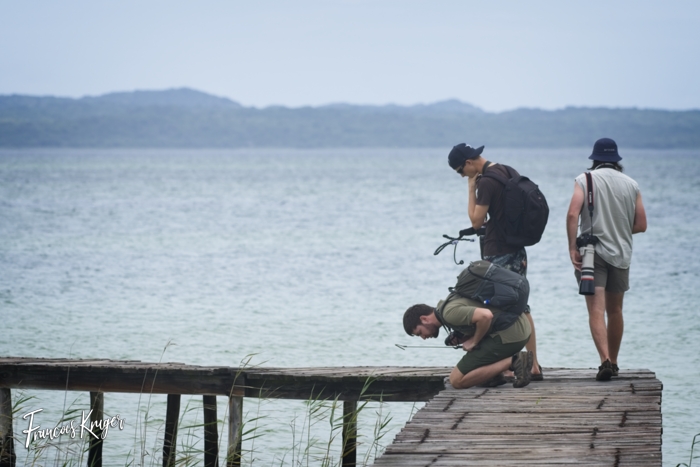 Jo, Joubert and Christopher at Kosi

So now that you have a better picture of this trip lets get started. If you don’t like birds or frogs you might want to think about reading on.

I would also like to mention that all three are qualified and have been handling these creatures for 10 years. They know what they are doing.

We started of with a big birding twitch for Gauteng with the Rufous-bellied Heron in Centurion on our way to pick up Joubert. We stopped got out, disappointed not to see it, many people were all eagerly waiting and as we got back to the car Christopher said: ”Look everyone is huddling up and pointing and the cameras are out…!” So we ran back and caught a glimpse and got some horrible ID shots/photos before it disappeared. It sure was a good start to the the trip to KZN.

First stop was in Pongola, an ‘agate’ spot. Christopher will have to give you correct definition of an Agate as he’s gotten into it big time in Kiwi country. Agates to me are volcanic rocks that have really pretty colours and lines when professionally cut and polished. Unfortunately our first site did not deliver much (water levels not right for the agates to be found) except for a few sneaky lizards, so we were off to Sand Forest Lodge in Falsebay, KZN. This lodge was awesome for birds and we started off with a few crested guinea fowl when entering the gate. Crested guinea fowl at the gate of Sand Forest Lodge

We exchanged stories and sites with the owner and got excited when the weather took a turn to wet from the extreme heat and drought we could see in Northern KZN. Sheltered from the rain by a big fig tree we started our braai, only to be surprised by an African Goshawk. This proved to be just the start, we headed out in the rain and these crazy guys found 27 different species of frogs and toads. We even found some tortoises but unfortunately no snakes until we reached Saint Lucia. Driving back to our accommodation late at night, the car grew still as everyone was falling asleep , even Joubert with his young eyes was not keeping me the driver awake as he was supposed too. 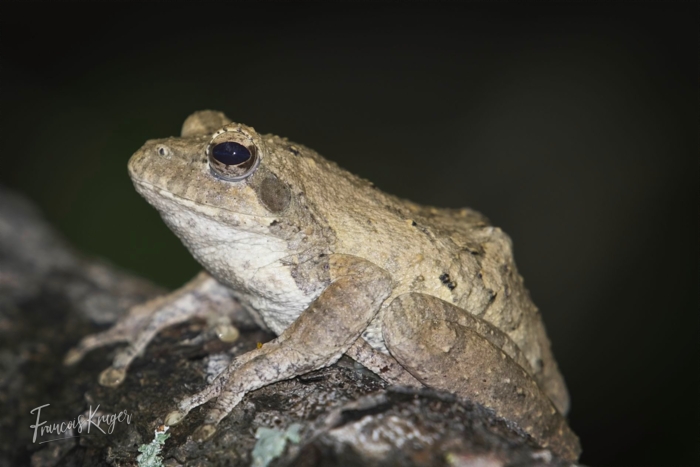 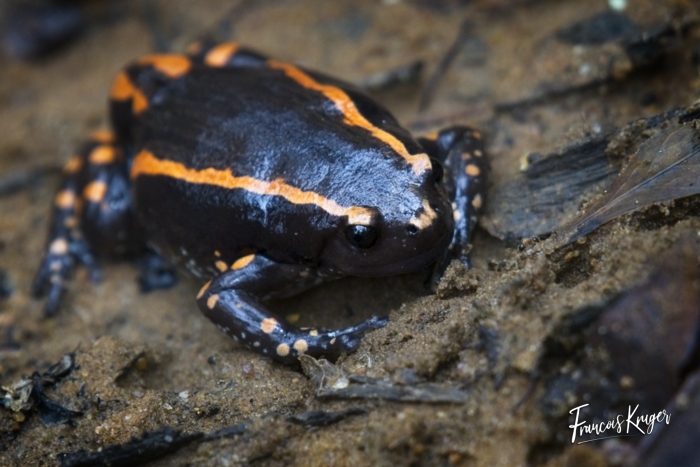 Luckily we made it back and took a 2 hours sleep before hitting the sand forest trail for some rare birds. It really delivered well . The gardens around our Chalet also had just the garden had us ticking birds and taking pictures as proof. Black Flycatcher in the Garden at Sand Forest Lodge Joubert even managed to find a Natal green snake to get the spirits up. Next stop Kosi bay Casitas   with lots of awesome birds along the way including Jo’s secret spot for Sooty Falcon. The Casitas treated us to some wonderful pizzas as we got ready for the nights cruise. Unfortunately we only found a lot of dead snakes and decided to call it a night but not after finding some cool stuff… The next morning we took it easier and birded the garden before we went to Kosi bay reserve where we quickly had a look around. African Yellow White-eye in the gardens at Kosi bay Casitas

On the trail and found some really cool birds and bugs, even proof of the palm-nut vultures. Next stop was a Pell’s fishing owl pin but it had gone into hiding, followed by Jo’s cousins spot. It’s a small private reserve where Jo’s cousin was researching orchids and he provided us with entry. This is where we got potato shots of pink-throated twin-spot but beautiful forest shots of the rare African Broadbill. We cruised the way back very chuffed with the birds and finally got some snakes the evening in the road. So we decided to try a really early morning drive to Tembe Elephant park. Our nap was haunted by a Wood Owls call next to our chalet. The early morning drive paid off as we got some more cool frogs. This day was going to be our longest, Tembe, Jozini, Ermelo, Pretoria. We picked up great sightings of the plain backed sunbird, our target species as well as a few others. No elephants, but we did go to the quiet side of the park for the sunbird. On our way to Jozini we came a cross a little dam, we just had to stop and have a look at and what a stop it turned out to be. Joubert got 2 new frogs, Christopher was in agate heaven, I showed a local herder how binoculars work and Jo started his nap. This little stop almost cost Christopher his wedding as we had a curfew that this long little stop put us way behind. This trip was absolutely awesome, got to see awesome birds, tell funny stories, enjoy great beers and just have fun. We just needed more time and sleep for me as I came back a very sick to be MC for Christopher’s wedding.